FRONT and centre of any attempt to develop a bonsai is the capture, storage and wise use of energy. Nothing happens without energy, it is the prerequisite for the growth of every living thing and it comes to all plants from the sun via  photosynthesis.

VERY broadly speaking this is a yearly cycle although extra energy may be needed from time to time including when dealing with an abnormal event e.g. defoliation (more on this later).

FOR MOST of us the majority of our bonsai are in the development stage and normally a large part of that development is achieving a bulky trunk with good taper, and encouraging thicker branches in the lower part of the tree which become
progressively thinner and shorter as we move up towards the apex. This will require plenty of fertilizer and water and an oversized pot to provide more consistent moisture levels and soil temperature.

When leaves on any particular branch capture energy, starch is stored and new vascular tissue is laid down in that branch and any part of the trunk below that point, resulting in thickening. The more leaves the more thickening. This knowledge can be used to our advantage. 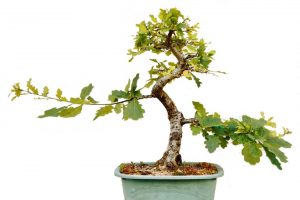 AS THE tree begins to approach a structural balance with the heavier wood in the lower regions we can start cutting back overlong branches to promote backbudding and so build the structure of each branch. I normally do this type of work around the second half of June but I know others who recommend doing it in the dormant season.

I HAVE mentioned hormones a couple of times so I think a (very) short explanation is due.
Hormones control all aspects of plant development from breaking dormancy to ripening fruit. There are six main groups of hormones, two of which are of particular interest to us.

EVENTUALLY you will feel that your tree is good enough to be exhibited in your local society’s show, a justly proud and exciting moment, but a word of caution.

The Tyranny of the Show.

IN ANY discussion about stored energy in bonsai it is important to mention defoliation (leaf pruning), the removal of some or all of the outer leaves in mid-summer to promote increased ramification and smaller leaves. This technique is most often used on maples but can be adapted for use on many other deciduous species. In this regard you would do well to seek advice for any particular species.

I HOPE that I have helped you to approach your pruning decisions from a different angle. Pruning for the sake of it is bad practice, you need to be able to justify every cut. As I said at the beginning, front and centre of any attempt to develop a bonsai is the capture, storage and wise use of energy.

Nothing happens without energy.

A further note on hormones, if the imbalance is reversed, i.e. reduced cytokinins, roots are formed. That’s how cuttings and air layers work!

Clearly some of the above advice does not apply to conifers, particularly with regard to defoliation! However the general principles about energy still apply, even though the techniques and stylistic aims may differ.

I acknowledge that I have simplified the amazing complexity of photosynthesis to within an inch of its life, not to mention the wonderful world of hormones, but my skeletal descriptions should be enough to suit the needs of this piece.